It’s a story that begins with North Korea trying to refuse to imprison him, and ends with him going home on the personal airplane of America’s top spy.

It’s clearly more than an average vacation, yet this is exactly what 25-year-old Matthew Miller – the Bakersfield, California citizen who had his release from North Korea secured last Saturday by U.S. Director of National Intelligence James R. Clapper – has just experienced.

Enduring 210 days held prisoner by Pyongyang, Miller’s tale – now revealed exclusively by NK News – shows more signs of being an extreme vacation causing a major headache for Washington than the “six years of hard labor” North Korean state media called it when he was sentenced in September.

Despite fears in Washington about Miller’s attempt to claim “political asylum” during a tourist trip to North Korea this April, an interview with NK News shows that, far from being arrested upon entry, it took considerable effort for the curious American to get entangled in the DPRK legal system.

During his nearly six months in custody, Matthew Miller said he wanted to find out what North Korea was like beyond the tourist trail, something it seems he was successful in discovering.

“This might sound strange, but I was prepared for the ‘torture’ but instead of that I was killed with kindness, and with that my mind folded and the plan fell apart,” Miller told NK News this week from California.

“I sincerely apologized to North Korea, it was not coerced at all,” Miller said of his court statement to DPRK legal authorities.

“Before going I did not think I would feel guilt for my actions toward North Korea. Over time that changed and I did feel guilt for the crime, so in that sense I consider what I did to be a mistake even though I did achieve (my) goals.” 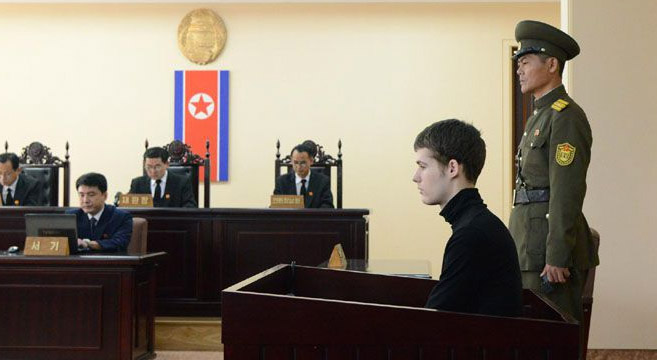 When curiosity about the international pariah state was not satisfied by regular news and documentaries, the California-based citizen decided to travel to and attempt to defect to the DPRK in April 2014, because the American “just wanted to have a face-to-face with North Koreans to answer my personal questions,” he said.

“I achieved my personal goal of seeing more of North Korea. I wanted to connect with the people – not question the government or the politics. I have no personal politics. This was not a political trip.”

Miller, who left an almost undetectable online footprint up to the point of his detention, was detained by Pyongyang on April 25 – 15 days after he arrived in country.

Five months later, Miller was sentenced to six years of hard labor on espionage charges, a crime he called both true and false.

“I was not there to give secret information or anything like that. I just wanted to speak to an ordinary North Korean person about normal things,” Miller said.

Yet despite what would have once been a hard-earned propaganda prize for Pyongyang, North Korea actually tried hard to get him to leave “on the next plane” after they took him into custody, said Miller. “But I refused. So they detained me.”

Miller might be considered a tourist from hell, but one with the best of intentions.

(For complete story and links to all North Korea see NKNews.org link below http://www.nknews.org/2014/11/matthew-millers-excellent-adventure-in-north-korea/)

Pre-order Sympathy for the Devil, the new book by Nate Thayer

Please donate to support this blog

I am a freelance journalist who makes my living from writing. If you enjoy this blog, a donation, no matter how small or large, would be much appreciated and will go directly to supporting my ability to write and publish independently. I am grateful for the support of my readers.

Featured Posts: Sympathy for the Devil by Nate Thayer

More Posts about Sympathy for the Devil

How Ted Koppel and ABC TV Tried to Steal my Life Work By Nate Thayer December 8, 2013 I am banned by legal agreement to write the following: ABC Television/ Disney Corporation, after seven years in court, where they attempted to bankrupt me and ruin my reputation for objecting to them stealing fifteen years of […]

Herb Trader: A Tale of Treachery and Espionage in the Global Marijuana Trade A Book Review, Sort of….. Excerpts from Sympathy for the Devil:A Journalist’s Memoir from Inside Pol Pot’s Cambodia. (To support the publication of Sympathy for the Devil, and to read other excerpts, see the right hand column of this website) (Copyright Nate Thayer. […]

A Day in the Life of a Freelance Journalist—2013 Here is an exchange between the Global Editor of the Atlantic Magazine and myself this afternoon attempting to solicit my professional services for an article they sought to publish after reading my story “25 Years of Slam Dunk Diplomacy: Rodman trip comes after 25 years of […]