My pal, Lamont, has made it clear he wants to be active on the high powered Washington social circuit, to hang out with the Big Dogs.

And he insists that cannot be accomplished in front of the computer, on the couch, from my living room. Requiring someone to carry Lamont’s (poop) bags, means that I have been forced into the maelstrom of the canine cocktail circuit in recent days, attending the dog equivalent of receptions, diplomatic functions, book signings, block parties and grand openings that Lamont has crashed. And each has offered new, surprise encounters.

Today, on our way to schmooze with the regular after-work gathering of the neighborhood canine hoi polloi in the dog park, a frightening scenario appeared on the sidewalk rapidly bearing down on us.

Four young African American men headed in our direction on an isolated side street, perhaps twenty five meters in front of us. They were swaggering purposefully, loudly engaged in boisterous smack talk, two of them well over six foot 5 inches tall, dressed in baggy jeans and wife beater tank top t-shirts, with long dread locks, sunglasses, and do rags on their heads.

They were holding chains attached to choke collars, which were restraining  two huge pit bulls. They all fell silent as they approached Lamont and I.

I had an ominous flashback to a 1970’s Charles Bronson flick.

My instinct was to cross the street, but Lamont would hear nothing of the sort. He tugged tightly at his leash, rapidly wagging his tail, making it impossible to remain either inconspicuous or neutral, insisting on giving the teenagers a proper hello.

“Lamont, you may have miscalculated this one, pal,” I muttered.

Within seconds, I was surrounded. And Lamont disappeared under the saliva dripping jowls of the two Pit bulls, who, in comparison, made Lamont look more akin to a gerbil than a dog.

“How old is he?” said one of the Crip impersonators in a monotone. I attempted to sound relaxed and answered.

“Lamont,” I replied trying not to sound meek.

“This is Slick and that is Rufus,” said Crip number three, pointing at the killer beasts who had my virgin Lamont on his back only slightly visible under the rippling muscles, shaking jowls, hooded eyes, and flying saliva enveloping him on the sidewalk.

I felt a lingering unease that, at any moment, my fate would be similar at the hands of my human counterparts. 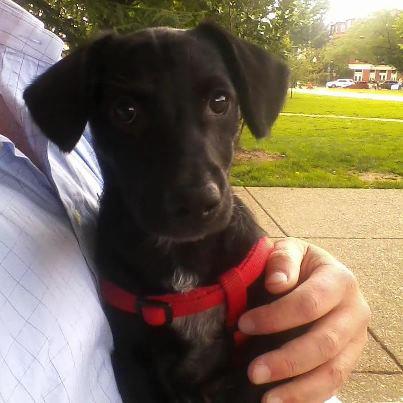 Lamont, however, appeared to be enjoying himself thoroughly.

He leaped from beneath the killer pit bulls and jumped up on the leg of Slick’s owner, wagging his tail ferociously and, looking two meters skywards into the sunglasses framed by dreadlocks, demanded a smooch and reciprocal gesture of affection.

“He is sssooo cute!” exclaimed Slicks sidekick. And the rest of the gang melted in unison offering a series of cooing sounds and baby talk.

We exchanged pleasant conversation for a couple of minutes, punctuated by smiles and easy laughter, before moving on our separate ways.

The Great Lamont had singlepawedly diffused the tension.

Or refused to recognize any where it didn’t need to exist. Either utterly clueless or unpolluted with preconceptions, Lamont wiggled and wagged and whistled toward the park, looking up at me.

Lamont is either a reckless idiot or a genius. I may have learned something today. Perhaps Lamont just had nothing to unlearn.

Pre-order Sympathy for the Devil, the new book by Nate Thayer

Please donate to support this blog

I am a freelance journalist who makes my living from writing. If you enjoy this blog, a donation, no matter how small or large, would be much appreciated and will go directly to supporting my ability to write and publish independently. I am grateful for the support of my readers.

Featured Posts: Sympathy for the Devil by Nate Thayer

More Posts about Sympathy for the Devil

How Ted Koppel and ABC TV Tried to Steal my Life Work By Nate Thayer December 8, 2013 I am banned by legal agreement to write the following: ABC Television/ Disney Corporation, after seven years in court, where they attempted to bankrupt me and ruin my reputation for objecting to them stealing fifteen years of […]

Herb Trader: A Tale of Treachery and Espionage in the Global Marijuana Trade A Book Review, Sort of….. Excerpts from Sympathy for the Devil:A Journalist’s Memoir from Inside Pol Pot’s Cambodia. (To support the publication of Sympathy for the Devil, and to read other excerpts, see the right hand column of this website) (Copyright Nate Thayer. […]

A Day in the Life of a Freelance Journalist—2013 Here is an exchange between the Global Editor of the Atlantic Magazine and myself this afternoon attempting to solicit my professional services for an article they sought to publish after reading my story “25 Years of Slam Dunk Diplomacy: Rodman trip comes after 25 years of […]